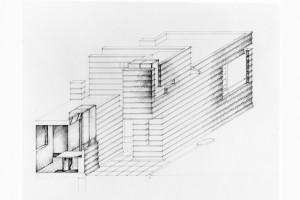 There are few places less receptive to modern architecture than American colonial villages. Yet, George Ranalli Architect was contacted when just such residents in Westchester County, New York sought some relief from life’s inconveniences in their beloved 1920s home. The modest yet stately house, surrounded by greenery, featured a facade composition of three dormers on axis above a more casual arrangement of handcrafted window and door enframents.

The project for a two-story expansion responded to requests for additional, brighter space.  The end result is a larger and brighter kitchen including a new dining area, and a new family room, and upper story study/library adjoining the master bedroom. Landscape architecture enhanced the newly shaped outdoor garden.

The architecture is attuned to its host structure in terms of size,  scale, and materiality. The new addition upper-story, for example, aligns to the horizontal boards and battens of the existing house.  It also provides space within the original house the benefit of modern lighting design.  Wood window frames, for example, inserted into walls, and wrapping around the ceiling, serve to liberate dark areas. A variety of natural light effects in the kitchen include dappled sunlight through a new skylight/ bay widow.   Reflected sunlight animates the new family room through an arrangement of small windows, and natural light glints and shades a ‘choir-loft’ staircase, connecting the inside the existing bedroom to a new rooftop patio. Niche doors inside the new family room linking the addition to the new patio-garden, and architecture for a sheltered passageway between car park and house, also contribute appealing lighting effects and garden views. Outside, shade and shadow is accentuated in the reflected light of whimsical cooper roof scuppers channeling rainwater through stone troughs, into delicate stone basins., and a central cistern.