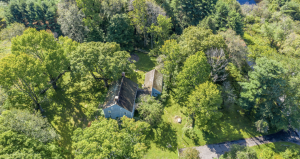 In 1993, the American novelist Philip Roth commissioned George Ranalli Architect to design a pool house and indoor pool. He asked for architecture that knew the value of looking outward. Decades earlier, he had searched for a secluded rural spot, and in 1974, he found his tall grey clapboard farmhouse, built 1790, surrounded by maple trees, at the end of an unpaved road in Cornwall Bridge, Connecticut – a Litchfield County town of 1,461 populace. After purchasing the house, he bought the neighboring lands to patched together147-acres of pastures, woods, and orchards, crisscrossed with split-rail fences and antique stone walls.  At the time of the commission, Roth spent long days and many nights in his writer’s studio – originally the farmhouse chicken coop- heated by a wood stove and fireplace. The pool house was situated beside the studio and between two old stone walls along an abandoned entrance road to the property. The studio and pool house were joined by a short passageway to the studio.  The orientation of the building, and its mass, adroitly divided by a low percentage of openings, sets up energy conservation. The design celebrates its wooden structure. Exterior elevations composed of Douglas Fir board-and-batten horizontal cladding accommodate both the northern climate and acoustical considerations. The west-facing elevation shows off the building’s copper roof. The east-facing elevation features distinctive wood-framed windows. Inside a travertine stone ‘walking’ lane runs parallel to the swimming pool pressed up against the length of the building to the west, and anchored at the far end by the soaking tub. The interior is craftily finished with wide panels of Marine plywood and Walnut hardwood joints. The precise alignment of interlocking geometry to the horizontal board-and-batten of the exterior contributes a subtle sense of coherence. Several large roof skylights and three central-pivot doors usher inside daylight and expansive views, whether one is swimming or not. The client decided to discontinue the project due to profound personal and health problems.  The project went on to receive an American Institute of Architect- NYC Chapter design award in 1995. It has been exhibited in Prostruction: Theoretical Architecture (Feb. 19-Mar.31, 1994) Michael Ingbar Gallery of Architectural Art, New York, N.Y.; Drawing from Architecture (Oct. 21-Nov. 21, 1994) Yale University School of Architecture, New Haven, Connecticut; Present tense: the architecture of George Ranalli (Nov. 14, 1997-Jan. 10, 1998) Artists Space Gallery, New York, N.Y., and the National Academy of Design 117th Annual Invitational Exhibition, (May 1-Jun. 9, 2002), and featured in publications such as Casas Internacional 57: George Ranalli (Spanish English), Madrid Spain: Kliczkowski, 1998; and In Situ: George Ranalli Works & Projects, Oscar Riera Ojeda, 2015.